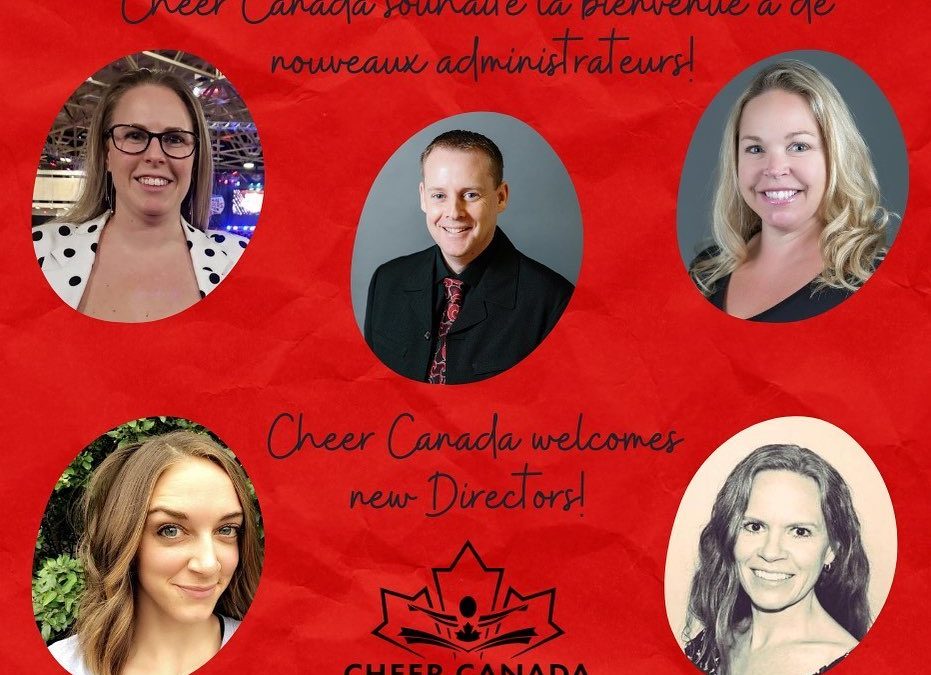 The board is pleased to welcome:

Suzanne is a True Sport Champion who believes in providing quality sport experiences that are values-based and principles driven. She has an Advanced Coaching Diploma from Seneca College with a focus in gymnastics. With more than 10 years of experience working in the coach education department at a National Sport Organization, Suzanne has a high level of expertise in the NCCP, from grassroots to high performance, with proven innovation in curriculum design and online learning. Suzanne is a Master Coach Developer and has completed extensive leadership training, with a focus on management by values, including a Women in Leadership certificate from Cornell University and completion of the Women Emerging Leaders Development Program with the Canadian Olympic Committee. Suzanne’s personal work style includes making connections, listening to understand, trying new things, valuing relationships, and acting with integrity and gratitude in everything she does.

Keri is a gym owner and coach who is based out of Kamloops, BC. She sat on the board of directors with BC Cheerleading Association 2017-2020 as the secretary of the board and is currently a credentialing administrator for the BCCA certification program. She began as an athlete in Ontario in 2005 and transitioned into coaching in 2011. She has experience with development of marketing plans, HR management as well as implementing those plans and is / has been certified as a coach in various disciplines through NCCP, CASI, CSIA, ORCKA, among others. Along with BCCA Keri worked alongside ViaSport and Sport BC to help further the sport in her home province. She sat on the membership committee which helped to develop and implement the cheer-reg program and has extensive experience with that program. She also has experience with gaining sponsorship for events as well as event production specifically with BC Provincials which she was integral to getting off the ground and is now an annual event. Keri is hopeful that she can help build some capacity within Cheer Canada and give back to the sport that has given her so much.

Patti was a founding member of Cheer Canada and has been involved with the sport’s governance for more than 30 years in Manitoba. She was the Vice President of Cheer Manitoba and worked to merge the province’s two governing bodies. She has worked closely with the ICU and set up the bid process in Manitoba for teams to attend Worlds in Florida, as well as supported the development of scholastic cheer in her province. Patti has spent most of her life involved with Cheer. She looks forward to working with a new group to achieve more for the sport nationally.

Dan is a Nurse Manager at Kingston Health Sciences Center, where he leads 250 employees, and two community partnership programs. He holds a Masters of Arts in Leadership from the University of Guelph and has completed the Advanced System Leadership Program at the University of Toronto Rotman School of Management. Dan has learned about cheerleading through his children’s involvement in the sport and appreciates the life skills, including confidence, self-value, perseverance, dedication and teamwork, that it has taught them.

Janie Lapierre is the founder of Kicks Cheer & Events and SpiriX Athletics. In addition to being a former cheer athlete, she has been involved in coaching for 20 years at all levels and was involved in the creation of the Quebec Cheerleading Federation. Janie served several terms on the board of directors. She has also been a trainer for coaches and judges for the FCQ. Janie has also judged in Canada and the United States for more than 15 years. Janie will be part of the Canadian Olympic Committee Volunteer team Canada House for the Tokyo Olympics in 2021. Janie hopes she can help Cheer Canada build a solid foundation for the future of Sport.

Additionally, the Board of Directors would like to thank all of the nominees for their interest. We are excited that there are so many skilled and talented Canadians who want to help Cheer Canada accomplish its goals.

For the 2020-21 season, the Cheer Canada Board of Directors are:

Jim Greenough, Pacific Representative (currently on a Leave of Absence)